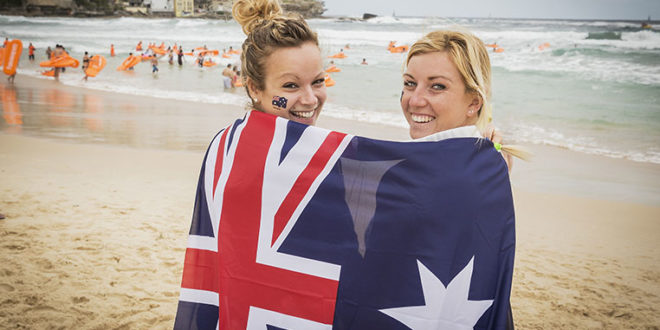 See someone you know in the street? “G’day”.

Maybe you walk into a classroom, you’re a teacher, and you greet everyone in the class. “G’day guys!”

Or maybe you have a podcast like I do, and every podcast you start with, “G’day guys!”. G’day.

So it’s just a simple greeting, but you’re asking for a bit more information. (A) Bit more than just, “G’day”.

So maybe you meet someone for the first time. “G’day mate. How’s it goin’?”

Or maybe you walk into a job interview. Even then you can be a little bit casual, and you could say, “G’day. How’s it goin’?”.

Maybe catching up with some friends as well, “G’day guys, how’s it goin’?

No dramas, mate. No dramas.

This is the equivalent of, “No worries”, which is a very Australian one as well.

“Drama”, as in if there’s a drama there’s an issue, there’s a problem.

Maybe someone’s bumped into you in the street, and they’ve said, “Oh! Sorry mate.”

Maybe someone has come to a restaurant and accidentally spills a little bit of water on you, and they say, “Oh my gosh! I’m so sorry.”

You could just say “No dramas, mate. No dramas.”

Or maybe you give something to someone and they say thank you and you say in return,

“No dramas! You’re welcome. No need to thank me. No dramas, mate.”

Righto. This is short for all right, and we’ve just taken it “Right” and we put an “-o” in the end, and we pronounce it like “righ-do”.

And we would say this any time you want to say, “All right” or “OK”.

So you might say this if someone’s giving you an order, “Can you go and do this?”.

Or maybe someone’s told you something, and as a way of just saying, “Oh ok. Oh all right.” you might just say, “Oh righto. Righto. OK. Righto.”

And the last one, and I couldn’t leave this one out for sure is, “Mate”.

And you’ve probably heard me say it about a dozen times already in this episode. Mate.

And we quite often mute that sort of T at the end. We’ll just say “Mate”.

It’s the kind of thing that you would just add to feel a little bit more friendly when you talk to people, particularly strangers.

I would use this to say to someone I’m on the same level as you.

We’re friends. I’m talking to you as if I would be talking to a friend of mine.

So, if I was paying for my car to be serviced I might say to someone, “Oh, thank you so much, mate. Cheers!” and he might say, “No dramas, mate.”

So, I would use this, especially, if I was a foreigner.

It’s going to make it sound so Aussie when you refer to people as “Mate”.

They’re going to love it.

So that’s it for this episode, guys.

Use these five expressions in your day to day life, particularly, if you’re talking with Australians.

I think you’re going to be surprised just how much the average Australian is going to love hearing you say,

What would you like the next episode to be on, guys?

Have you got any other expressions that are Australian that you think I should talk about?

Put them in a comment below, and let me know.

قبل Words To Mispronounce To Sound Like A Native
بعد A Simple Tip To Sound Australian: The Muted T