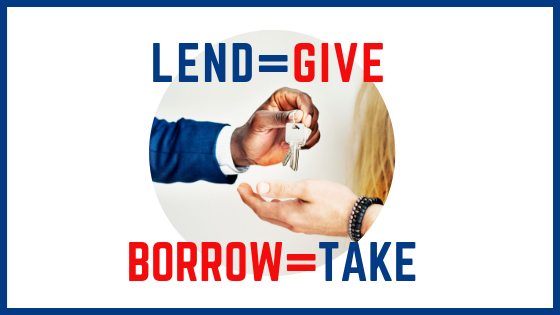 To borrow and to lend, what is the difference?

So it’s the same kind of idea, it’s just that directionality from someone or to someone is kind of inferred depending on which one of these verbs you decide to use.

So to lend, to lend is to give something to someone, for a short period of time, expecting that you’ll get it back.

So if I was to give you one of my CDs and I want it back later, that’s me lending the CD to you.

If you borrow something now, in the same scenario where you imagine the CD and money, you are the one who is borrowing the CD from me.

You are the one who is borrowing the money from me.

So to borrow means to get something from someone when you’re intending to give it back after a short period of time.

So we’ll go through a few more examples just to try and give a bit more context as to how you would use borrow and lend.

And I might also add just quickly before we do that, that to lend is an irregular verb, so to lend becomes lent, in the past simple.

I lent it to him.

Whereas, borrow is a regular verb and in the past simple it’s just borrowed.

I borrowed it from him.

Anyway, let’s get into the examples.

So you’re borrowing it, the bank is lending it.

Example number two, imagine that you want to go on a weekend road trip down the coast, but you don’t have a car, or your car is out of commission, it’s broken.

It’s currently being repaired at the mechanic’s, you know, there’s a servo down the road where there’s a mechanic next to it, you’ve left the car there to get repaired, whatever the case may be, you don’t have a car, but you want to go on this road trip.

So you ask if you can borrow your parent’s car.

A third example could be that two girls want to go out clubbing or partying, so they want to out with their friends in the city, they want to dress up in dresses, in really nice clothes, put make-up on, they want to have a few drinks and go dancing.

So one of them accidentally spills a drink on her friend’s top while they’re getting ready at home, in the house, and the other girl offers to lend her a different top for the night because obviously she doesn’t want go out with a stained top.

So the girl who is giving her spare top, her top that she has as a second top, she’s not using it herself so it’s a spare top, she is lending that top to her friend.

And the other friend could say, “Ah, thank you so much for letting me borrow your spare top, I’m going to borrow your top for the night, I’m going to use it and then I’ll bring it home, I’ll probably clean it at my house, I’ll make sure that it’s nice and clean and then give it back to you tomorrow. Thank you for lending your shirt to borrow. Thank for allowing me to use it and then return it to you.“

So hopefully that helps, Kelly.

I know it’s a bit of a confusing one but just go over it a few times and try and remember that it’s directionality.

If it’s you taking something from someone with the intention to give it back to that person, you are borrowing something.

So let’s practice a substitution exercise here guys, we’ll use the past simple tense for both of these verbs so we can practice the irregular lent, for, to lend, in the past simple.

And we can practice the regular borrowed in the past simple of the verb, to borrow.

So listen and repeat after me guys.

I borrowed his car

He lent me his car.

You borrowed his car

He lent you his car.

He borrowed her car

She lent him her car.

She borrowed his car

He lent her his car.

We borrowed his car

He lent us his car.

They borrowed his car

He lent them his car.