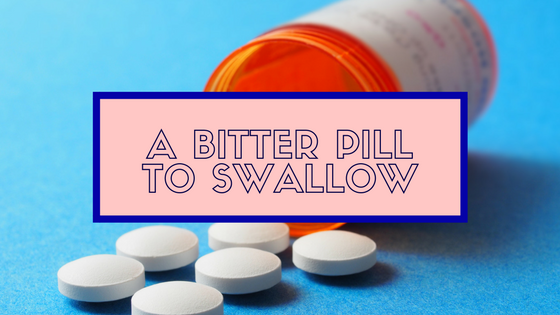 A Bitter Pill To Swallow

اصطلاح A Bitter Pill To Swallow

G’day guys! Welcome to this episode of Aussie English. I hope you have all been having a good week. It’s been a little while since I’ve posted an episode and I hope you’ve really enjoyed the interview that I posted up the other day.

So I talked to a friend, Shana, about dating for about a half an hour maybe even longer. I think it could’ve been 40 minutes or so. And I just thought that I would give you guys some… some more interesting material where I have a proper conversation with someone about a topic that is relevant to a lot of us. So dating is something I’m sure most if not all of us are doing or have done in the past, and Shana and I just wanted to try and use a lot of vocab surrounding dating as well as different expressions used to talk about dating, and give you exposure to an American as well as an Australian, so two different accents, talking about the same topic, and then talking about how the expressions may differ in the US compared to Australia, and as well how dating and the perceptions of dating and different things that we consider okay or… different behaviours, different things that we do, how it changes, how it varies between the US… So different expectations of the man of the woman, etc.

So anyway, if you liked that interview let me know what you thought. We’re wanting to do more of those in the future especially for people who are learning English from ESL teachers because Shana my friend form the US is starting up her website ESL Prep Class where she creates materials for people to use prior to having a class. So before they have a class in order to prepare for the class. So, say, you want to have a class with an ESL teacher about dating, she’s going to create some material that you can either read or you can listen to like this podcast to give you access, to give you exposure to the vocab, to expressions and all of that sort of stuff surrounding, say, dating, prior to you having an ESL class or an ESL lesson with a teacher. So that when you show up, so that when you go to, when you have the lesson you have already had that experience talking about, listening to and practicing the vocab that you’re going to use. So anyway. We’re hoping to do more of those sorts of things in the future whether you’re having an ESL lesson with anyone at the moment or plan to in the future or whether you just want some stuff to listen to to practice these different kinds of expressions, words and topics. So let me know what you think. Let me know if you thought it was too long? Did we speak too quickly? Was the quality of audio ok? Because I know… we recorded this over Skype and I know that my voice is ok but Shana’s is a little bit hard to hear at times. So anyway, yeah. Give me some feedback and let me know what you think guys, and I will try and improve things in the future for you.

So the word “bitter”, the word “bitter” is a word that explains anything that has a sharp, acrid, unpleasant taste. So, “acrid” is a bit of a complex word and it wouldn’t be used very often, but to have a sharp or unpleasant taste. If something is bitter then it means that it is not sweet. So you might know the drink lemon lime and bitters, when they put the bitters in the drink, it is something that gives it a bit of a bitter taste. So yeah, anything that isn’t sweet is considered bitter, or to have a bitter taste.

“A pill”, a pill is a medication. So anything that you would put in your mouth and swallow as a medicine tends to be a pill, especially in a solid form. So it’s not a liquid, it’s a solid. So, a pill can be a capsule of medicine, or it can just be one of those small white circular hard masses that you would swallow. So that’s “a pill”.

And “to swallow” is I’m sure most of you know, to cause or to allow something to go down your throat, to pass down your throat. So if I swallow, I make that sound [swallowing sound], I swallow something. You know? I could swallow a drink. I could swallow food. And you could also use this figuratively, where if you have to swallow something, like, say, a bitter pill, or something that you’re not really comfortable with. So like a situation, “yeah you’re just going to have to swallow that”. It means that you’re just going to have to deal with it. You’re just going to have to accept it. You don’t have a choice. You have to swallow it. And so that’s the sense of that it’s a bitter pill to swallow. It’s kind of a situation that you don’t like but you’ve got to deal with it. You have to accept it.

Another example, and the last example, could be, say, you’ve gone to have a job interview. You think you’re going to do really well at the job interview. It’s the dream job you’ve always wanted. You’re really excited but at the end of the day you don’t get the job. You could say, “not getting the job was a bitter pill for you to swallow”. Or you could just say, “not getting that job was a really bitter pill”. “It was a bitter pill”.

So some exercises we’ll go through guys. I will just change the pronoun in the sentence “It was a bitter pill for me to swallow”. And you guys can practice your pronunciation after me. So let’s go:

It was a bitter pill for me to swallow.

It was a bitter pill for you to swallow.

It was a bitter pill for him to swallow.

It was a bitter pill for her to swallow.

It was a bitter pill for us to swallow.

It was a bitter pill for them to swallow.

So that’s the expression “a bitter pill to swallow” or “a bitter pill” guys. A situation or information that is unpleasant but has to be accepted. Hope you have a good one guys and I’ll see you soon!