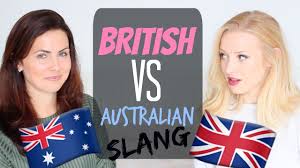 Hi everyone! Welcome to another mmmEnglish video. I am here in London and I have just run into another lovely English teacher YouTube English teacher – it’s Lucy! Hello! I’m Lucy from English With Lucy and I also have an English Channel. I’m sure that a lot of my viewers also actually subscribe to you so I’m sure they’ll be very excited to see us together!

Yeah, surprise! So some of you might have already seen the video that we made together on Lucy’s channel that was all about British slang words and Lucy tested me to see how good my knowledge was of British slang. It was OK, but… [You were pretty good actually!] Really? [Yeah!] Well, right now in this video I’m going to be testing your knowledge of Australian slang, which is where I’m from. I’m holidaying in London and Lucy’s from London, but I’m originally from Australia.

A mate. It’s a friend! We actually use that the same. And we also like to imitate Australians by saying ‘G’day mate!’ ‘G’day mate!’ If you were going to imitate an Australian, you’d be like, ‘maaaaaate’! That’s perfect! OK, ‘barbie’ Barbecue! OK, good. Next one is… What if i said i was going bush? Are you going out? To the countryside? See how the English people say “we’re going to the countryside” and Australian people say “we’re going bush”! There’s no preposition or anything!

You’re just going bush!I think you probably know this one. It’s quite commonly known that we call these ‘thongs’ Flip-flops Yeah. Because thongs is very skimpy women’s underwear. Yes. So, what do you call thongs (the underware ones)? Ummm… G-strings. Oh yeah! G-strings! I remember I had to change my G string, on my violin! What if i said i was going to have a ‘durry’? Is that a delicious curry? No, no it’s not. Not just a curry, a delicious curry! Not quite as good as a delicious curry!

You just have to leave your mouth open! A ‘sanga’. A ‘sanga’. I don’t know! If I said I’m going to grab a ‘sanga’… Sandwich! Yes! Sandwich is just ‘sanga’. I didn’t do too badly, did I? No, not at all! You actually did better than I expected, so well done! So, that was Australian slang. Thank you, Lucy for helping me out that one! Thank you for testing me! Well, you did OK!