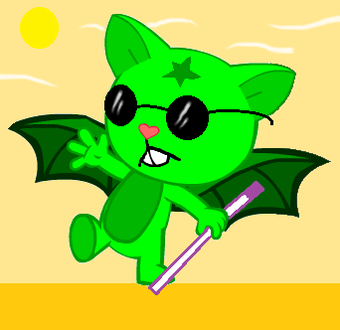 اصطلاح To Be As Blind As A Bat

In today’s episode I teach you guys the expression “To Be As Blind As A Bat”, what it means, how to use it and then we go through some exercises.

Expression – To Be As Blind As A Bat

G’day guys and welcome to this episode of Aussie English.

So, what does, “To be blind as a bat” or “to be as blind as a bat” mean? This phrase means to have very very poor eyesight. So, ironically bats aren’t blind, but there is this kind of… there is this kind of thought that they can’t see because these guys rely on echo-location to capture their prey and to move around at night. I should say that some bats, not all bats but some bats, rely on echolocation, and yes, those that do rely on echolocation have reduced eyesight but they can still see. But there is a large group of other bats, which are namely fruit bats, for example, there are a lot of those in Australia and they don’t use echolocation and thus have really good vision because they can’t navigate through the world using sound. So, they have to use their eyes. Anyway, getting sidetracked.

“To be blind” means to be unable to see. So, if you’re unable to see you’re visionless, you’re without vision, you’re sightless, without sight. You could be visually impaired where you’re not necessarily completely blind but you can’t see very well. So, that’s the word “blind”, “blind”.

The word “bat”. The word “bat”. It’s a mammal. It’s a nocturnal mammal. So, these guys are mostly active at night. That is what the word nocturnal means. And they’re capable of flying. So, I’m sure all of you if you know the story of Dracula, the vampire, will know what a bat is. It’s what Dracula turns into and flies away, a vampire bat. Um… so they have membranous wings. They have wings that are like membranes. So, a membrane is a very very thin um… tissue. So, in the case of the bat it’s its skin. A thin membrane that goes from its fingers to its limbs and it uses this membrane to spread its wings out and be able to fly. And, yeah, these guys are really cool. I love them. They’re all over Melbourne. Both fruit bats and smaller, what we call, microbats in Melbourne that make the [bat chirping sound] sounds. What you will hear out at night. There’s a few species that you can hear. And the really really cool thing about these bats is that you can actually hear when they’ve caught something. So, I love this fact. When they’re just trying to navigate around and fly, you know, and avoid running into… well not “running” but flying into trees, they make a more spread out sound of just [bat chirping sound]. That kind of spread out sound. But when they finally hear, they actually use this sound to bounce off things and come back to them so they can “see” around where they’re going. When they used this sound and find insects such as, moths or beetles or flies, anything that’s flying around, they speed up. So, they speed up these sounds, these little [bat chirps] so that they can tell which direction this animal is moving in so that they can follow it and hunt it down and then grab it with their wings and their legs. And so, you’ll actually hear these guys make this kind of slow all the way up to speedy speedy speedy sounds and then suddenly go back to the slow ones again, and that means that they’ve caught something. So, you’ll hear like a [bats chirping] kind of sound. It’s really cool. And so, if you hear that you’ll know that there’s bats around for one, and secondly you’ll know that they just caught something. So, one of them’s just caught a moth and eaten it and then kept flying away. Anyway, sidetracked again.

When would you use this expression? “To be as blind as a bat” or “to be blind as a bat”. It’s just anytime you want to talk about or refer to or mention someone or something that can’t see very well or see at all. So, you could say “without my glasses I’m blind as a bat”. So, it’s an exaggeration. You’re obviously not blind because you can use glasses. You wouldn’t be using the glasses if you were completely blind, but it’s to sort of suggest you can’t see very well. So, you could also say um… “My nanna’s starting to lose her vision, my grandmother she’s starting to lose her vision and she’s blind as a bat these days”.

I was blind as a bat.

You were blind as a bat.

He was blind as a bat.

She was blind as a bat.

We were blind as a bat.

They were blind as a bat.

You could probably also say, “We were as blind as bats” or “they were as blind as a bats”. So, you make it plural if you want. Both are ok. I don’t really see a… anything weird there. I would understand exactly what you meant. The second example is going to be the sentence, “Without my glasses I’m as blind as a bat”, and we’ll conjugate through that.

Without my glasses I’m as blind as a bat.

Without your glasses you’re as blind as a bat.

Without his glasses he’s as blind as a bat.

Without her glasses she’s as blind as a bat.

Without our glasses we’re as blind as bats.

Without their glasses they’re as blind as bats.

Without our glasses we’re as blind as a bat.

Without their glasses they’re as blind as a bat.

He’s blind as a bat.

She’s blind as a bat.

He’s blind as a bat.

She’s blind as a bat.