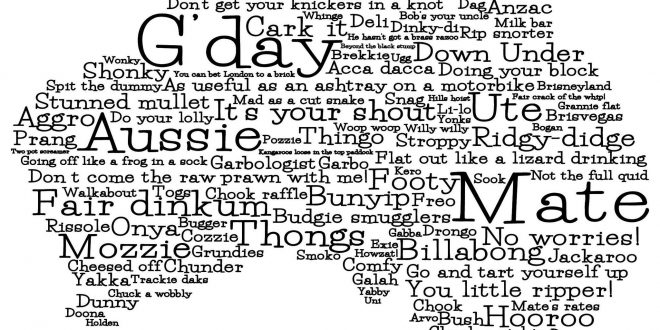 I got a postcard today in the mail from listener Juliana.

So she sent me a postcard with a few different slang terms and expressions from Australia, and I thought it would be the perfect chance for me to break these down and talk about whether or not I actually use any.

Alright let’s get it started.

The first one “G’day mate”.

“Pleased to make your acquaintance.”

This is definitely one that I use a lot.

The next one “He’s blotto”, “Inebriated beyond the capacity to stand up”, meaning he is so drunk he can barely stand or he can’t stand “He’s blotto”.

This is one that I hadn’t heard of until I read this postcard.

It could be said but I have never used this.

“You little ripper!” meaning “Words of praise failed me”.

This is one that I would hear quite a lot, and I’m sure a lot of more Australian Australians in air quotes would say “You little ripper” but I probably wouldn’t use this in my day to day language.

So “Your presence is no longer required.” according to this postcard.

It’s a somewhat politer way of saying “F off” or you know “F-U-C-K off” if you wanted to be really rude but “Rack off!”, I probably wouldn’t use this that often but I wouldn’t be surprised if I heard it and I would know exactly what I meant. So more Australian Australians would probably use this, yeah, in slang.

This can mean a few things and it’s something I would probably use from time to time.

I would use “Fair dinkum”. You can use it to mean that you are “True, legit, the real deal.”

So you can just say “Oh fair dinkum? “Fair dinkum!” if someone tells you something that surprises you a little bit.

So you may be correct in your assertion but shut up.

As in “You may be right, but be quiet shut up”.

“Pull your head in”.

This is one that I would probably use but it’s hard.

This one probably for me would mean pull your head in, as in, “Stop being an idiot! Stop mucking around!”.

It could be like someone’s trying to… Alright say you’ve got a child at school and he’s slacking off and his marks are going down hill so he’s not doing very well.

He’s passing but it’s not great.

This means you want to drink a lot of alcohol.

So would you like “To drink large amounts of alcohol with me until we both drop” according to this postcard.

I wouldn’t use this, personally.

I… that wouldn’t be my assumption either.

That would be the feeling I get but it’s not something I use.

“I’m in total agreement with you.”

This is relatively colloquial, very slangy.

I would probably not use it very often but I definitely would use it from time to time.

So… and it’s something you’re going to hear a lot of Australians say.

Now I know what this means and I use this as well quite a lot.

In fact I think most Australians would use this in day to day language.

“Your shout” if you value your wellbeing you should buy me a drink.

Yeah, it’s not really a threat.

It’s more it’s your turn to pay or it’s “Your shout” meaning can you shout me the next round of drinks, the next meal the next lift to work “It’s your shout”.

It’s normally with paying something so if you have to pay for something it’s your turn, because last time I paid for all of us whether it was a drink or something to eat or the petrol for the car it could be anything you’ve paid for.

That was “My shout” and if it’s your turn it’s “Your shout”.

“Go on” means quite a few things, but according to the postcard “I’m not entirely convinced you know what you’re talking about”.

So I guess from this point of view it would be if someone was telling you something and you were a little skeptical you could be like, “Go on.” or maybe they mean. “Go on. Go on”.

Yeah see. Personally I wouldn’t. I can’t go on.

That would be more what I would use “Go on” for.

I don’t think I would use it like this for being skeptical about what someone was saying.

Now I do… I know what this means but I probably wouldn’t use it.

That’s an interesting way of phrasing it because they’re using the collective “We” as opposed to “You” but it’s referring to that person that you’re talking to is and you smell.

Yeah I would know what this means but I wouldn’t use it personally.

I think I’ve done an episode on this.

What would what do you want.

“Whadayawant?” is a very Australian sort of contraction of “What do you want?” all the way down into sort of this one word of “Whadayawant?”.

I would use this all the time.

I use those kinds of contractions of all those words a lot in English.

“To have a chunder”.

Now this I would use “To have a chunder.”, however, this one I would use around other Australians, because they would know what I meant and foreigners would be like “Ewhh?”. “Chunder” is to vomit, to munt, to throw up, to spew.

We’ve got a lot of words for this.

“To have a chunder” is for you to go and have a spew, have a vomit, have a throw up.

And what does it say here “The delicate act of regurgitation.”

There you go, “The delicate act of regurgitation”.

“To have a chunder.”

I don’t think I would ever use “Mug” as like a I guess a term of endearment here for another person, “Mug”.

I think in English in Australian English particularly… maybe all kinds of English, “Mug” would refer to someone’s face.

But even then, I wouldn’t really use it.

I would use that all the time.

I wouldn’t say that.

“May I inquire about your welfare.”

You guys know that I use this a lot.

This is a very very Australian greeting as well.

So definitely learn this one if you’re coming to Australia because people are going to say this to you all the time, and they’re not necessarily going to want to hear what you’ve actually been going through, they’re just saying hello “How ya goin’?”, and you would just say “Yeah good. Not bad.”

“You really are rather dim witted person”.

And if you’re dimwitted it means that you are not very smart.

So you are very witty. It’s dim like as if you had a bright light dimmed down, so the light intensity sort of dropped down, it became dim, if your wits were to become dim you’re becoming dimwitted and you are dimwitted.

You are very unintelligent.

So anyway, “You drongo”, this is the kind of thing that is used a lot, and my father, my father would use this a lot, and on me in particular.

So if I did something stupid or something silly like say I was trying to build something outside and I was hammering above my head and something came down and smacked me, you know, because I was being clumsy.

He could say, “Dude, you drongo! What are you doing you drongo? You drongo.”

I hope you guys liked it.

I hope guys get a bit of a sense for how I use these slang terms and the ones that I don’t use.

But, yeah, there are a lot here that are definitely Australian that you could learn, but there are also a few that are probably not very useful or not anymore.

They might have been once upon a time when this was made.

Anyway, thanks Juliana so much for the postcard.

I really appreciate it!

And in the next episode I will do An Aussie Sheila, the girl’s version.