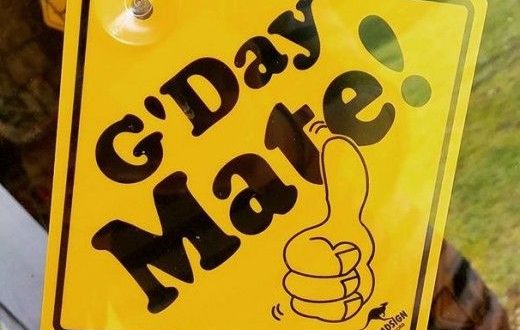 This is the first one.

Would you care for some tea?

I wouldn’t use this, personally, but I would hear this everywhere.

This is the kind of thing that the older generation would say.

My grandparents would probably use this if I came over and they offered everyone or myself some tea.

2. Go and tart yourself up.

The next one, “Go and tart yourself up”.

This is definitely one that’s only used for women.

And again it’s a little bogan I risk saying.

I don’t think many people would say this that I know, but it is the kind of thing that I’ve heard before and I have heard people used before not just in a stereotypical in the movies or on TV kind of thing.

And according to the postcard it means please dress in your best clothes.

If I heard this I would think it meant put makeup on, dress up in nice clothing, ready to go out as a girl on the town, go clubbing, whatever it is.

If you “Tart yourself up” it it’s sort of referring to someone dressing up like a tart. And a tart is kind of a bimbo or a pretty but silly kind of girl, a bit ditzy.

The next one is “Wanna come to our piss up?”.

This is not the kind of thing many women would say at all.

This is the kind of thing that guys would probably say.

Yes I would hear this.

Probably not use it myself, but it’s very common in Australia.

This is one as well that’s used quite a lot, again, by the older generation.

No one my age would use this, especially men.

This is the kind of thing that again women would use this like tying yourself up wouldn’t refer to men.

The shop attendant might say to you “Oh, how you goin’ luv?” if they’re an old lady.

5. Don’t get your knickers in a knot.

“Don’t get your knickers in a knot”.

And it’s kind of like don’t get upset by literally having your underwear, your undies, getting twisted up or knotted so that they’re that uncomfortable that you’re kind of getting angry.

I use this all the time.

This is one that I actually use.

Tell me about the gossip.

So “Goss” is just short for gossip as in rumours or the latest news.

7. The old man shot through.

This is, again, “The old man”, this just refers to a husband or potentially your parent, a father, but it’s a guy obviously “The old man”.

And it means that the husband left town, he’s gone, he’s left, he’s shot through meaning he’s run away.

Again, it’s the kind of thing I wouldn’t use myself but I wouldn’t be surprised if I heard here in Australia and I’d know what it meant.

No, it wouldn’t mean that at all.

If I were to hear that or use that would mean go and f*&^ yourself.

Go and screw yourself.

It’s pretty rude to be honest.

I wouldn’t use this if I were you.

I wouldn’t be surprised if I heard it.

I might use it if I was incredibly angry with someone who was… I don’t know they could have been doing anything, but I would tell them “Go get stuffed!”.

I probably wouldn’t say “Bitch”, but if you want to be really really rude that is something that you could say.

“Shut your gob” is one that you will hear, again, “Gob” is sort of a slang term for mouth.

So, “Shut your gob!” just means stop talking, shut up.

And here according to this postcard it means tell someone who cares, which is another way of saying, you know, stop talking.

Go and talk to someone who cares.

Tell someone who cares.

It’s probably not that common anymore though.

So, again, it’s like you’re talking quite a bit?

I wouldn’t hear this that often.

I wouldn’t learn this one.

I wouldn’t bother with it, but if someone said you “Don’t crap on”, it just means don’t make crap up, don’t keep talking crap, don’t exaggerate, don’t make things up.

I’ve never heard of a “To bot” I don’t know what that is.

I assume in this sense it means can I steal one can I take one.

Can I have one.

“A fag” here, obviously we know that “A fag” is a very very very condescending word for a homosexual man.

Don’t use it in that sense.

You offend pretty much everyone if you use the word “Fag”, unless you are obviously explaining the word.

So, don’t get angry at me you commenters.

So “A fag” can just be a cigarette.

And if I “bot a fag” here, it means, yeah, may I have one of your cigarettes.

I wouldn’t learn the verb “Bot”.

That’s literally the first time I’ve ever seen that, but you might hear people say “Can I’ve a fag?”, “Can I bum a fag?”, which just means can I have a cigarette?

Now the last one.

The last one is “Grouse lippy”.

“Grouse lippy”, and it means, according to the postcard, what a nice shade of lipstick.

I myself probably wouldn’t comment on someone’s lipstick shade.

So I wouldn’t use this, but I would use these individual words on their own.

That you’re going to hear everywhere in Australia.

You’ll hear me say that.

“Lippy”, again, to will probably be used quite a lot by almost everyone to mean in lipstick.

There might be the person who says “Nah, I don’t use that slang term”, but if they hear the word “Lippy” they’re going to know that you’re talking about putting on lipstick.

Anyway, guys, that’s this set of 12 Australian expressions, Australian slang terms, Australian idioms, and whether or not I myself would use these.

I hope you’ve learnt a lot of Australian slang, and what to use, what not to use at least according to me and what I experience in Australia.

See you in the video guys.