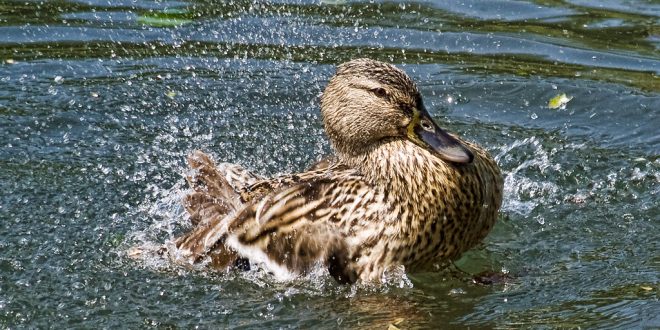 In today’s episode I cover the expression “Like water off a duck’s back”, what it means as well as how and when to use it.

I also briefly touch on the differences between how Americans and Australians pronounce the word “water”, as well as the pronunciation shift from a “T” sound in the word “water” to more of a “D” sound when speaking quickly.

’day guys and welcome to this episode of Aussie English.

Today we’re going to do some more expression stuff. We’re going to do an expression that involves an animal. So, I’ve got a whole bunch of these that I’m looking forward to doing for you guys because anything involving animals is awesome, and when it’s combined with something used in English such as an idiom it’s even better.

What does this mean? To be um… without any apparent effect. So to have no effect on you, on someone, and I’ll go through um… each of the words in this expression and then I’ll give you some examples of when you might hear this kind of expression, and when you can use this kind of expression, and then we can practice some exercises in order to… in order to really nail your pronunciation, intonation, cadence, all of that related to how you speak English.

So, let’s get started.

“Water” I’m sure most of you will know this one as well. It’s essential to all living organisms. It’s a liquid. We drink it. We all depend on it. If you want to stay hydrated you need to drink water. If you get dehydrated it means that you haven’t been able to drink enough water. If you rehydrate you’ve just drunk some water when you were dehydrated in order to become hydrated.

“A duck”, a duck is a kind of water bird. I think it’s a fowl. So, you’ll see them on farms with chickens, with geese, with other kinds of birds. It has a broad blunt bill, and the bill is the part of its face that it eats with. So, it’s like… it’s a beak. It has short legs. It has webbed feet. Webbed feet means that its toes are connected to one another with skin. So, they’re webbed. Um… and they have like a waddling kind of gait. So they kind of walk in a bit of a strange way where they waddle. So that’s a duck, and you’ll hear them… you’ll know the sound *quack, quack, quack, quack, quack, quack*. That’s the sound that a duck makes *quack, quack, quack*.

Um… “Back”, a back, the back of something, is the opposite to the front of something. It’s the rear surface of something’s body. So, my back for example goes from my shoulders down to my hips. It’s behind me. So, a duck’s back is that top part where its wings are sitting. So, above its wings and between its wings is its back.

So, they’re the different words in the sentence, “Like water off a duck’s back”. I hope that makes that a little more clear.

When would you use this phrase? If… say, for example someone was insulting you. They were saying nasty things to you. They were trying to offend you. So, they were saying things in order to try and make you upset, to get a reaction from you. If these insults didn’t affect you, so, you didn’t care, you know, you were laughing at them effectively. It was sort of like “well… I don’t care what you say?” you know, “it doesn’t bother me”. You could say that, “Your insults are rolling off my back like water off a duck’s back.” So I’m saying it’s similar to the way that when water falls on a duck’s back it just rolls off back into the um… into the pond, into the water that it’s sitting on, onto the ground. It doesn’t soak in. it doesn’t get absorbed by the duck’s feathers. And I should add too this is because a duck actually has oil in its skin. Most animals… most birds, rather, that um… are associated with water will actually have water proof feathers. Um… so they have an oil that they secrete from their skin, I believe, that coats their feathers so that water doesn’t soak in to their feathers and make them heavy, and also make them cold. So, this is like any of those birds you see that dive under water, which is what ducks do, when they dive under water and they get whatever food they’re after they come back to the surface and you’ll… you’ll see like they’re completely dry. It’s almost like they didn’t get wet. and this is because the water just falls right off them. It comes off their back. It comes off their head. It doesn’t soak into their body because of the oil that their feathers are covered in, and this is why they’re constantly preening themselves. They’re constantly using their beak to sort of ruffle through their feathers, to move their feathers, to organise their feathers, and to spread that oil on their body so that they stay water proof. And that’s why the water flows straight off, or rolls straight off a duck’s back.

So, let’s do some exercises guys. Um… the first one will be, “It was like water off a duck’s back”. So, just repeat this after me:

And I might just add here that anyone who isn’t wanting to copy my accent with regards to an Australian accent, you might want to say “water” if it’s more of an American accent that you’re going for, you might want to pronounce the “R” in the word “water”. And you’ll notice how I say “AH” instead of “ER”. “Water”, “water”, that’s what Americans would say. Australians on the other hand pronounce the “ER” at the end of the word “water” as an “AH” sound. Just no “R” effectively it’s a “watah”, “watah”.

And the second exercise:

And you’ll notice there too that when I speak quickly the “T” in “water” is pronounced more like a “D”. So, instead of saying “water” or “water” if you’re American”. I think many people would just say “wader” or “wadah” for me in Australia. “wadah”, “wadah”, “wadah”. So, that’s one of those things you may have noticed already with previous episodes I’ve done. I talk about how “Ts” in words can often change into “Ds” when spoken really quickly. So, just one more thing to be aware of, play with, it’s not going to affect whether to not people will understand you but it’ll allow you to speak more fluidly if you start implementing that kind of technique when you speak quickly. So that’s the expression, that’s the phrase, the idiom, the term, “Like water off a duck’s back” or, “Like wadah off a duck’s back”.