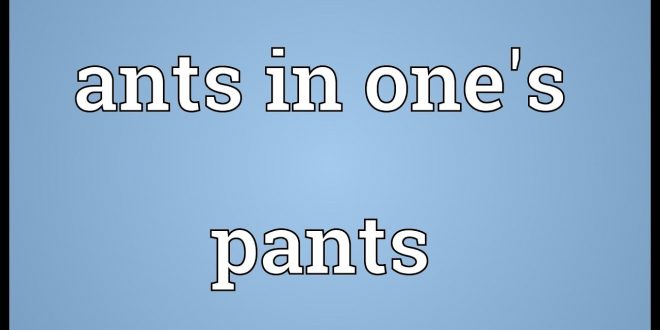 To Have Ants In One’s Pants

To Have Ants In One’s Pants

Expression – To Have Ants In One’s Pants

Hey guys. Welcome to this episode of Aussie English. It’s another episode including expressions with animals involved in them. So, idioms, phrases that involve animals. And all of these expressions that I’m using, I promise you they’re the kinds of expressions I use all the time, English speakers use all the time. There’re tons and tons and tons of expressions out there using animals, and looking a lot of them up recently I noticed there are some that aren’t used that often, there are some I’ve never even heard of, but then there are these ones, the ones that I’m going to include, that I use all the time or at least sometimes, or that I’m really familiar with. So, if I don’t use it I don’t really want to talk about it. I don’t want to make an episode for it unless I know that it is used quite often. That I recognise it, that I heard… that I hear it quite a bit because I feel like they’re the only ones that I can back up. That I can say, “These are commonly used in English”. If I haven’t heard of those phrases or they’re rarely used they’re kind of not useful to you guys so I’m going to try and avoid those where I can.

So, I’ll go through the definition of the different words in this sentence and I think it’s probably only going to be the words “ants” and “pants” that I really need to define. All the other words are pretty intuitive and I’m sure you all know them from having learnt the basics in English.

So, “an ant” is a type of insect, which lives in a large colony. So, a colony is a really large group of the same animals that live together, and they often live on the ground or in trees. They’re an insect so they have six legs. They have a sting. So, a sting is like a barb or a dart, a sharp pointed part of the animal often at the rear, at the back side, of the animal that can deliver, that can give poison or venom into its enemies, into something it’s trying to defend itself or its colony from. So, ants can sting, not all, but most of them can I think. Um… ants often have pincers at the front of their head, which they use to bite with or to pick things up, to manipulate things, and they don’t have wings apart from the males, which use them to disperse and to mate, I think, in a certain life-cycle in the colony. Anyway, that’s getting too complicated biology wise. An ant is just an insect with six legs, an ant.

“Pants”, which rhymes with “ant” and “ants”. Um… pants are the clothes that you wear on your legs. So, they could be like tracksuit pants or jeans. Pants is one of those um… bizarre nouns that we never really use in the singular, if at… if at all. You will never say “a pant” it’s always “pants” plural.

So, when would you use the phrase “To have ants in your pants”? It’s the kind of phrase that you would use mainly with children, mainly with younger people when they can’t sit still, when they can’t um… stop moving, when they’re fidgeting, when they’re restless. So say you’re a teacher sitting in a class and one of your students is really, really fidgety, is really restless and won’t stop moving, you could say, you know, say, his name’s Fred “Fred, what’s wrong with you? Have you got ants in your pants or something?” you know, “Stop moving around so much. Sit still for a moment” you know “Have you got ants in your pants? What’s wrong?”

Um… you could say it also if someone’s really excited about something. If they’re really anticipating an event and they’re, as a result, fidgeting, restless, you know, say you’re really excited to go to a party on the weekend and you just, you know, almost shaking with anticipation, with excitement, when you talk about it. Someone could say to you “what’s wrong with you? Have you got ants in your pants or something”. You know, “Calm down. It’s going to happen. We’ll go to the party. Just… it seems like you’ve got ants in your pants. So, chill out”.

So, that’s the phrase “Ants in your pants”, and we’ll go through an exercise where we’ll just conjugate through the present tense of the different pronouns. Um… of the sentence “I have ants in my pants”.

I have ants in my pants

You have ants in your pants

He has ants in his pants

She has ants in her pants

We have ants in our pants

They have ants in their pants.

I know these exercises are going to be pretty boring and they’re probably incredibly simple, especially for most of you. If you can understand what I’m saying you’re more than likely already, you know, highly fluent in English, but again it’s not to practice understanding these sentences. I’m sure you already understand them, or at least will after a few lessons. It’s more practicing the conjugation of verbs so that they become natural and effortless, you don’t have to think about this stuff when you speak. Practice your pronunciation, your intonation and cadence based off how I say it as a native Australian speaker. And, so that’s why this sentence I choose “I have ants in my pants” because one I conjugate the verb “have” using “have and has” based on the different pronouns. We go through the different pronouns and then we also use the different pronouns for possession such as “my, you, his, her, etc.”. So, I think it’s just a really good way of practicing those things.