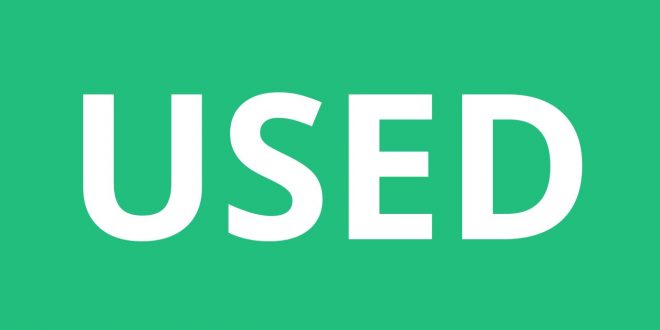 Ok guys let’s see how this episode goes today. I want to help you today nail the difference in pronunciation between the words “used” and “used”, “used” and “used”. And these are both spelt the same way in English “U-S-E-D” but they’re actually said differently. You’ll hear when I say “Used” I don’t vocalise the “S” and so that’s why you get the “Ssss” sound. It’s “Usssst” but when I say “Used” I vocalise the “S” and make it a “Z” or a “Z” sound. So, you hear “Uzzzd”. So, you’ll hear when I vocalise an “S” turns into a “Z”. It goes from “Ssss” to “Zzzz”. “Sssszzzz” as soon as I start making noise with my throat.

Anyway, I’m somewhat winging it today, and “To wing it”, if “You’re winging it” it means that you’re sort of making something or doing something with no prior instructions or no prior thought. I have written out somewhat of a transcript but I’m kind of just winging it obviously like I always do because I don’t read off a transcript. I just have sort of an outline of what I want to talk about written down so that I cover all the bases. And “To cover all the bases” means just to… if you think of baseball going from base one, two, three and then all the way home to base four. If “you cover all your bases” is means that you get everything done, you do it all correctly. So, “to cover all your bases”, do everything, if I talk about wanting to cover all my bases in this episode it means that I want to talk about all the things that I had planned on talking about prior to it.

So, this is probably going to be somewhat of a long episode today as I want to wing it, but we should get straight to it.

So, how do we use these words “Used” [unvocalised “Usst” sound] and “used” [vocalised “Uzzd” sound]? If you’re… we’ll go through “Used” [Usst] first. So, you can BE used to something or you can GET used to something. We’ll go through “To be used to doing” or “to be used to something” first. So, this is obviously quite often followed by the verb in the form ending with “-I-N-G”. So, doing, wanting, thinking. We… we use “To be used to doing” to say something that’s normal, not unusual. So, if “you’re used to something” it means that it’s habitual, you do it all the time, it’s not weird. So, you could be… you could say for example, “I’m used to going to the beach every day”. So, it just means that it’s not unusual for you to do those things. You’re used to it, you’re habituated to it, it’s normal.

So, “Used to + a verb”, “Used to + a verb”, “I used to” and then “do something”, “go somewhere”, “eat something”, whatever the example may be, if “you used to do something” it means that you did it in the past. So, we say this when we’re talking about something that happened on a regular basis, it happened all the time, but it doesn’t happen anymore. So, “I used to go to school when I was a kid, and now I don’t anymore because I’m an adult”. “I used to eat a lot of cereal when I was younger. I don’t really eat cereal anymore”. “I used to go to the beach in summer and get tanned all the time, but I don’t really do that now that I live in Melbourne and there’s no real beach nearby, at least not a real beach with waves, the kind of beach that I like”. You can also use this for something that was once true but is no longer true. So, for instance you could say ah… “I used to vote for the Greens but now I vote for the Liberals”, or “I used to get up early every single morning but I haven’t gotten up early in years. I hate getting up early now. So, I used to do it all the time but now I get up late everyday”. And you’ll often hear this clarified with phrases like:

As a young adult

So, the final one, and this is the one that’s pronounced differently with that vocalised “S”. So, instead of a “Used” [Usst] it’s a “Used” [Uzzd], “Used” [Uzzd], and this is the past tense or the past participle of the verb “To use”. So, this is when it’s followed by a noun. So, when you actually use something. So, if you use something in the past say, “I used a hammer to hammer a nail”, “I used my surfboard at the beach to go surfing”, “Yesterday, I used my car to drive to the beach”, “Earlier today I used my mother’s hairdryer to dry my hair after I went surfing”, “Last week I used my dad’s camera to take some photos of the surf”, etc etc etc. Whenever you want to talk about having used something, so the past tense of the verb “To use”, it’s going to be a vocalised “S”. “I used” and then the thing. So, this is when it’s not followed by a verb ending in “I-N-G” or a verb in the standard form of “To + the verb”, so, “to do”, “to go”, “to want”, etc.

So, I’ve covered that and I’ve kind of just done it off the top of my head. I also thought today that we would try and do it in the theme of the beach and summer. So, I would try and use a lot of vocabulary related to doing that. So, you will have heard me say, bodyboard, boogie board, surfboard, sunnies… actually I don’t think I’ve said bodyboard or boogie board yet, but I will say them. And I thought I would go through um… the definitions. I should probably go through the definitions of those.

A boogie board, at least in Australia, is a type of… sort of half the size of a surfboard made from foam. So, you have boogie boards, which are these really soft foam… I want to say bodyboards. Boogie boards are kind of the smaller ones that you would use as really really young kids. So, they weren’t hard and they were used in really shallow water, but bodyboards are the big really stiff foam boards that adults would use to surf really really big waves, and these are the kinds of boards that you would see if you looked in a surfing magazine and you saw someone using a bodyboard, that’s a bodyboard, and a boogie board is more for like recreational ah… young kids, reacreational uses, young children, adults who are old, you know, bodyboards [are] for the people who want to seriously bodyboard. So, that’s a verb, “To bodyboard”. And obviously, surfboards are the kind of boards you use to surf on.

So, I thought I would go through some exercises now guys just so that you get to practice these different sounds vocalised and non-vocalised. So, just listen and repeat after me.

So, listen and repeat after me guys. I’m going to try and really accentuate the difference so that you can really hear how I’m vocalizing and not vocalizing the “S” in these words, or in these vowels, these sounds as I do them. So, they’re going to sound pretty stupid at first but it’s an exercise to help you improve your pronunciation.

So, let’s go through some sentence exercises guys where you can repeat the entire sentence after me and practice these things in the context of a sentence as opposed to practicing them in isolation. We’ve done that. Hopefully you can nail the pronunciation of them on their own, and now we’ll go through some different sentence exercises. So, listen and repeat after me. And the first one that we’ll go through will be, “To be used to something”. So, remember for something to be normal, for something to be not unusual, for you “to be used to something” means that you do it all the time, it’s normal.

And I just noticed there that you might not even need to say the “D” or the “T” [sound] at the end of “Used” [Usst], because of the “To” afterwards [i.e. used to] it just merges and becomes “Useto”, “Useto”, “Useto”, “They’re useto”. So, that’s a little Like A Native ah… insert there on how to pronounce that. “I’m useto”, “You’re useto”, it’s just “Useto”. One consonant in the middle there [UseTo instead of useD To]

I’m used to going to the beach every day.

She’s used to sunbaking with her friends.

He’s used to living near the beach.

We’re used to travelling up the coast on weekends.

They’re used to getting up early to surf.

I’ll get used to…

You’ll get used to…

She’ll get used to…

He’ll get used to…

We’ll get used to…

They’ll get used to…

And, now we’ll go through a full sentence using these conjugated, “I’ll get used to…” in the future sentences.

I’ll get used to surfing alone.

You’ll get used to wearing sunnies.

He’ll get used to his new boogie board.

She’ll get used to standing up on her surfboard.

We’ll get used to swimming out in deep water.

I used to go boogie boarding every day.

You used to get sunburnt a lot as a child.

He used to live at the beach as a teenager.

She used to go surfing all the time.

We used to bodyboard at the beach.

So, listen and repeat after me again.

I used to bodyboard as a kid.

You used to bodyboard as a kid.

He used to bodyboard as a kid.

She used to surf as a kid.

We used to surf as kids.

They used to surf as kids.

I used some sunscreen at the beach.

You used some sunscreen at the beach.

She used some sunscreen at the beach.

He used a towel to dry himself off.

We used a towel to dry ourselves off.

They used a towel to dry themselves off.

So, that’s the episode for today guys. I, again, have tried to say these more like a native than really annunciating well and slowly saying these different sentences. So, don’t be discouraged, don’t be disheartened, if you’ve got to listen a few times to get used to how to say these phrases the way that I say them there’s nothing wrong with that. It’ll take a few times, but I hope eventually that you get used to it. You can listen a few times and get used to saying these things the way that I say them as a native speaker, and I hope that this episode is used a lot by you guys!

Anyway, it’s gone long enough. I’ve ranted a lot, I’ve spoken a lot, I hope it’s helpful. I hope the surfing, beach and summer theme was good for you guys to learn a bit more vocab and practice that sort of stuff regarding the beach. And I’ll chat to you soon as it looks like this episode is about to go past 20 minutes. All the best guys and get used to it! See you!

قبل Learning Vocab
بعد تلفظ Would not have