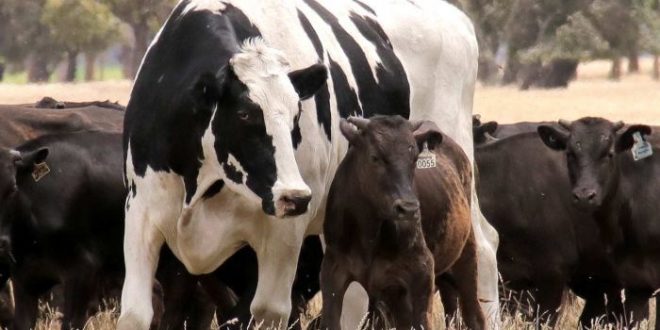 Learn Australian English in this post where I teach you guys 11 of the most commonly used cow idioms in Aussie English!

Figurative meaning: To become angry, agitated, worried or upset. Often said in the negative “don’t have a cow” when asking someone to calm down or chill out.

Literal meaning: Origins aren’t really known, but it was first seen in a Texan newspaper in the late 1950s. It’s linked to the British idiom “don’t have kittens”, as in “don’t give birth to kittens”. Both situations would understandably cause someone to be agitated or upset. Made famous by Bart on the TV show The Simpsons.

2. To take the bull by the horns

Figurative meaning: To face and grapple with difficulty without avoiding it.

Literal meaning: This idiom is thought to date back to the American West where it was common for cowboys to wrestler with bulls as entertainment at rodeos.

Example: “It’s time to take the bull by the horns and ask out that girl you like!”

Figurative meaning: For a long but undefined amount of time.

Literal meaning: This idioms dates back to at least 1829. It references the slow and unhurried pace at which cows do what they want including making their way home to the farm.

Example: “The President speech is dragging on for ages. It feels like he’s going to talk until the cows come home.”

Other forms: Until the cows come home.

Figurative meaning: To be very clumsy or reckless in the way one moves or behaves.

Literal meaning: The origin of this idiom is unknown but it dates back to at least the 1830s. The idea being that it’s hard for a bull in a china shop not to break everything it touches.

Example: “Grandma’s living-room is so full of trinkets and knickknacks that it’s hard not to feel like a bull in a china shop.”

Other forms: Like a bull in a china store.

Literal meaning: There’s no real literal meaning for this idiom. It is thought to have originated in the US where it was said by a reporter and broadcaster called Halsey Hall in the early 1900s.

Example: “Holy cow! I almost got hit by a car!”

6. To hit the bullseye

Figurative meaning: Said when someone hits what they’re aiming for, or by extension, said in response to someone who makes an accurate statement.

Literal meaning: This idiom refers to back in the day when archers would test their ability by aiming to shoot through the two eyes of a bull’s skull.

Example: “Bullseye! I hit the centre of the target!”

Other forms: To hit the bulls-eye

Literal meaning: Allegedly coined by Australian or New Zealand soldiers during World War 1. It built on the much older term “bull” from Old French boul meaning “fraud” or “deceit”.

Example: “Bullshit, I don’t believe you!”

Figurative meaning: Someone who boasts or lies constantly, usually to comedic effect. It can be intentional or accidental.

Literal meaning: The basic idea of this idiom is that someone is very artistic when it comes to making bullshit, i.e. falsity, seem real and true.

Literal meaning: Based on the idea that an ox (male cow) is an incredibly strong animal.

Other forms: As strong as a bull.

Figurative meaning: To be incredibly impatient or do something very rapidly and haphazardly.

Literal meaning: The idea behind this expression is that if a bull wants to get through a gate it will just run at it head first and try to break through with force. So if you do something impatiently and quickly you’re acting like a bull going at a gate.

Example: “The police didn’t analyse the situation and instead they went in like a bull at a gate.”

Figurative meaning: Something or someone that is a dependable source of income or profit.

Literal meaning: This idiom is a metaphor for a “dairy cow” which is used on farms to produce milk, thus offering a steady stream of income to its owner.

Example: “Our new internet business has become our cash cow.”

قبل Embarrassing English Errors : Piece & Piss
بعد اصطلاح To Be A Pain [In The Neck/Arse]